Here we are, at the annual (minus last year because ... I don't even remember, I just don't think I was in a good head space at the time) BIRTHDAY POST!
I don't guess anyone really missed it last year - I mean if you've followed this blog for any length of time you've probably got the Birthday Post memorized by now.

WE HAVE ARRIVED AT YEAR 24.
Sort of a boring-ish year...next year will be one of the "milestone" birthdays so we're keeping it pretty low key. As yooooozsh. (How do you even spell that? Like "usual" only the front part of the word)

ANYWAY. If this is your first time at the Annual Birthday Post, welcome! It's the totally true and somewhat traumatic story of my kids' birth.
Is Post Traumatic Birth Syndrome a thing?
It should be. I think I have it.
Also there are LOTS. OF. PICTURES.


Every year before I revise and repost, I remember. I relive. And even if it's just for one shining day, these memories make everything else fall away: all the petty irritations and frustrations, the dislikes and grudgy feelings...all of the things that, in the long run of life, aren't worth the importance we place on them.

It's been a long tough journey that has passed in the blink of an eye. THE DUE DATE: June 4th
THE BIRTH DATE: February 13th. Preemies for pre-valentine's day.
These children clearly get their lack of patience from me.  They were born at 24 weeks, or about 3 and 1/2 months early. They weighed just over 1 lb. each, and were about a foot long. I'm talkin' teeeeeny tiny. Micro-preemie, I think is what they are called now.

Anyway, this is my boy, at about a month old: I woke up the morning of February 12th, headed for the bathroom, and after about 5 minutes I called out to the baby daddy, "Either I've lost all control of my body functions or my water broke".
I'll give you a hint - my functions were still under my control.
So natch we rushed to the hospital, where the stupid ass snot face condescending nurse (actually I love nurses in general, but this one? NOT SO MUCH) had me lay on a gurney for an hour and then said that I was fine, no fluid was "leaking" (I know, gross), and the pains in my back and belly were just muscles stretching, NOT CONTRACTIONS...and then she tried to send us home.
Me being me, I caused a scene.
Hey, guess who ended up being right about me being in labor?

Here is my little girl, at about a month old:

The doctors tried to stop my labor for 24 hours, but apparently my kids were having none of that. On the 13th of February, my boy arrived in the usual way - of course, I was knocked out for the entire thing. My daughter was still safe and secure in her bedwomb -- the idea was to let her 'cook' a little longer (which would have been weird to have twins with different birthdays, right?).  So they were wheeling me into recovery when Miss Contrary's heart rate dropped to zero, and they did a SUPERFAST emergency C-Section to get her out. Evidently she didn't like being alone.
So it was like Twins Two Ways, with extra Mommy Staples.
This is also where I discovered my love of morphine. MMMMMMORPHINE.

Their ears were still folded down (WEIRD! I didn't even know ears did that until my kids were born. It was like puppy ears or something), and their lungs were not completely developed, and their little hearts were working overtime/doubletime.

They struggled for every single breath. They fought to live.

Thank you for this little miracle....(my girl at about 2 months) The doctors gave them less than a 50% chance of survival. Fortunately they got my stubborn genes as well as my temperamental ones, because my kids wouldn't listen to percentages; they went all HAN SOLO and were like NEVER TELL ME THE ODDS!

Their hearts were overworked, their lungs were and are covered in scar tissue, they are cursed with keloid scars as well as scars from perc lines and picc lines and a million little junkie scars on arms and feet from being pricked with lancets every hour. They have scarred veins, they had damaging bleeding in their brains, preventing brain growth. And yet...

Becca's first day home from the hospital! Nearly 4 months old and not even 5 lbs. I still have this amazingly tiny dress - I swear it's barely bigger than Barbie size. Those booties she has on? The foot part is less than 2 inches long. Each twin came home attached to oxygen and an apnea monitor - whenever we all went anywhere together it looked as though we were leaving home for a month, so laden were we with electronic equipment, oxygen tanks, diaper bags, strollers...which is partly why I became the hermit I am today. #Lazy

Here they're about 7 or 8 months old, I think (did I ever mention that I am TERRIBLE about labeling pictures? Because I am). Clearly Becca was already trying to wear some sort of tiara:

One morning I discovered that my daughter knew how to climb into her brother's crib. When Becca was about two, this is what "Go get ready for bed" meant: Josh had the softest, wispiest hair so I let it grow and grow... until that time I gave him a buzz-cut and he's been sporting a Greg Brady WhiteBoy 'Fro ever since. Unless I cut it myself, in which case he looks sort of like he's got the mange. #TrueStory 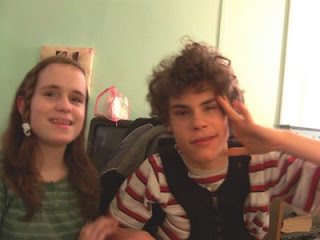 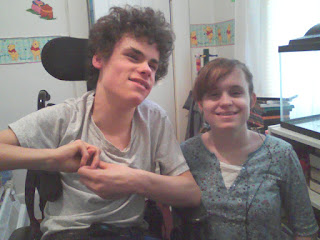 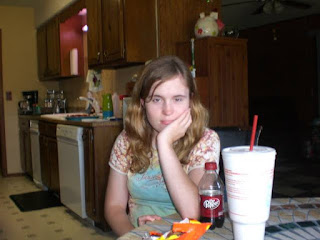 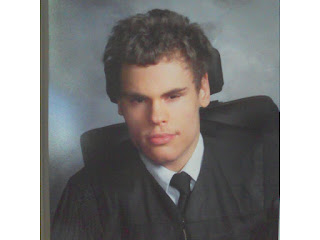 There were middle-of-the-night phone calls with doctors on the other end of the line telling me that they didn't think THIS twin or THAT twin would make it through the night- so we'd rush to the hospital to sit and put our hands in the "baby terrarium", as I thought of them, and listen to the beeps and the whooshing of the ventilator and wait for the inevitable.
There were six months in the NICU and 3 or 4 Thanksgivings and Christmases spent in the hospital. For awhile I thought they were going to name a wing of the children's ward after us, or at least keep "our" room in reserve. 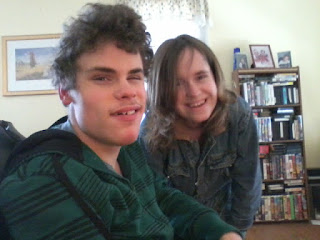 There was RSV and BPD and ROP and a bunch of other things with initials that I barely understood.
There was double hernia surgery and laser eye surgery and surgery to correct crossed eyes.
There were staph infections and even a broken arm that was caused by changing my son's shirt whilst in the NICU - he of the tiny little brittle bones. There were breathing treatments and nebulizers and oxygen tanks and albuteral and lasix and digoxin and tegretol and synthroid and constantly changing medications and frequent seizures and paralyzing fear (well, that last thing was *me*).


I remember a tiny Becca setting her pacifier down in something that had spilled...she picked it up, took a suck, and said, "What the hell is all over this?!" It made me laugh so much that I couldn't even correct her. 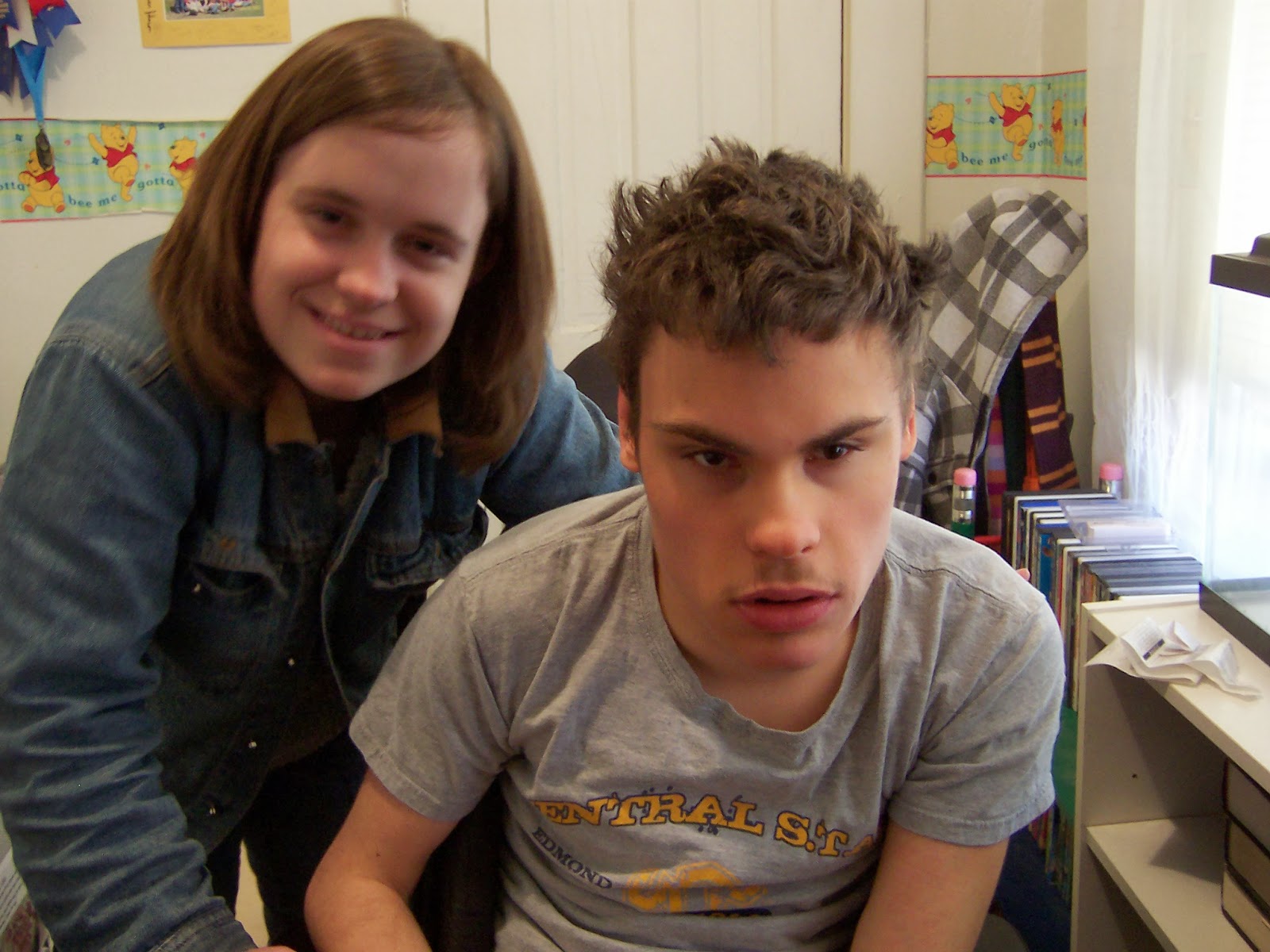 I remember one single sentence of absolutely clear speech from Joshua in 21 years...he was sick and angry and yelled, "I WANT MY BOTTLE!"  It was astounding and amazing and thank goodness my mother witnessed it or I would have thought my ears were playing tricks on me. 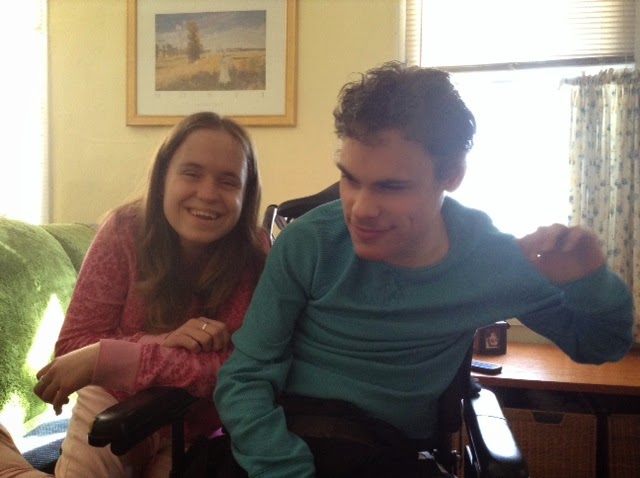 TWENTY ONE.
(or The One Where Joshua Gives Duckface) 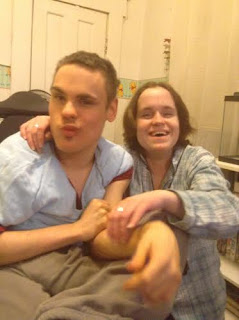 This milestone is especially important for Joshua, as he has already outlived all early predictions of life-span. Though it's a little like living under the Sword of Damocles, we do not give in or give up. And despite the fact that they were and are so fragile health-wise, for the last 10-12 years I can count on one hand the number of times they've had to go to the doctor or hospital.

2 Twins at 22
(YES, Winnie The Pooh is still on the walls. Joshua loves Pooh bear) 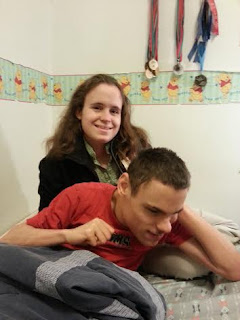 *Mystery Of The Missing 23*

AND currently 2 @ 24 ea.
(or the one where that jackass boychild purposely refuses to look at the camera for 20 takes
and also is still wearing breakfast on his face because BRAT.) 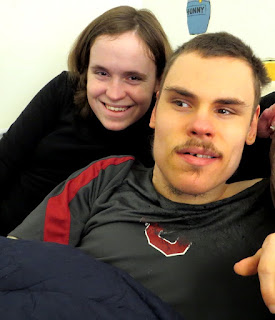 How could I not believe in miracles? When I look upon those miracles every day of my life.
I love you, my babies. I have been and will always be thankful for every breath that you take, every blink of your eyes, every morning that you wake. I love you with everything inside me.

If all the world was a beach, I would love you more than all the grains of sand added together. Times infinity.

Happy Birthday Josh and Becca! Now go give your mom a big hug and a kiss and tell her what an incredible mother she is... because she is.

Awww thank you! xoxoxox YOU are an amazing mother and all-around person yourself. <3

What a story! SO incredible! Beautiful kids you have!

This is wonderful. Thanks for resharing -- You have an amazing family and I LOVE all the pics of your sweet kids.

Shop more of my closet on Poshmark

I be all up in your email

Where I get free stuff

"OMG you are a SERIOUS piece of work, sister. ~ Nick Petrie, author of the Peter Ash series

It's A Major Award!